The idea for the questionnaire came from Sharon (Sharon from Spain).  A good exercise in Shasha stock taking! I hope the question of how many outfits one has collected for the Sashas never comes up.  It would take a great chunk out of one’s life to get to grips with that one.

1.      How long have you been in the Sasha hobby?
The first Sashas I bought were in 1974: A blonde girl and a blonde baby boy. They were for my daughter, Yasmin, who was then 5 years old. I started collecting them for myself just before Christmas 1999, when I retrieved Yasmin’s Sashas from the attic.

Some of the above dates are approximate dates arrived at through research and statements made by sellers.

5.      Which doll is your favourite?
I have two: Iona and Hanna. Not special dolls in any way, but just serious bonding for some reason.

6.      Are you waiting on any dolls now? If yes, which one(s)?
No. But I should like to have Aliyah re-rooted. She is a beautiful early Trendon with a short bob (which is quite sweet) but I think she could be rather special with a good real hair re-root.

7.      What is your grail doll?
Oh, an early No Philtrum Blonde Trendon. This would be something!

8.      Did you learn something new because of this hobby?
Lots! Above all I learned a lot more about the Sashas and their history and therefore to really appreciate their qualities. The other thing, I suppose, is how many talented people there are out there creating clothing etc. for Sashas.

9.      Have you made any friends you might otherwise not have because of this hobby?
Yes indeed. I have got to know a number of really special people through the Sashas and I have made one particular friend, whose friendship I value very highly. The experience has been entirely positive, so far!!!

10.  What are your doll plans for this coming year?
To try and enjoy the Sashas without feeling too guilty about spending so much time with them (not to mention money!!!); To keep up with other people’s Sasha blogs, which are a great delight;  Maybe sell one or two of them – it seems ridiculous to have that many – and to have at least one of them re-rooted with real hair. Maybe add a NN to the list. They seem rather nice and would make the line-up a little more varied.

Here they are in no particular order 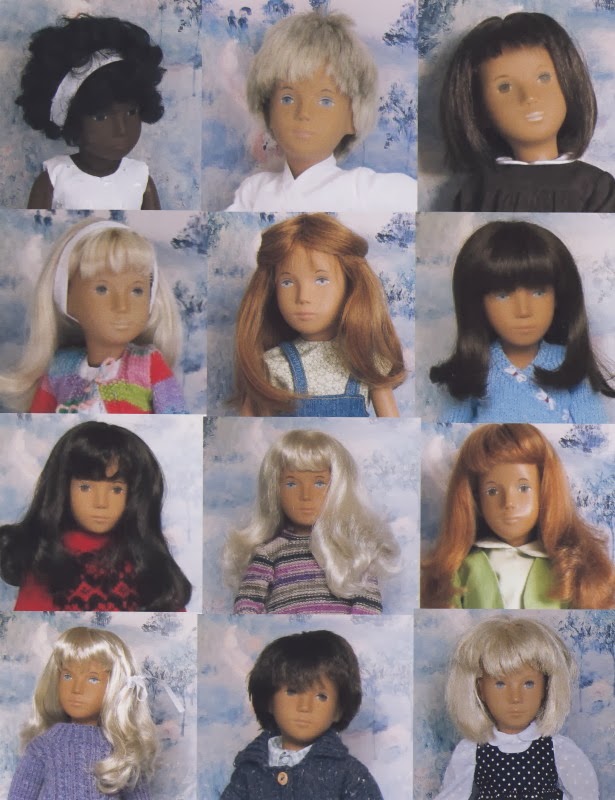 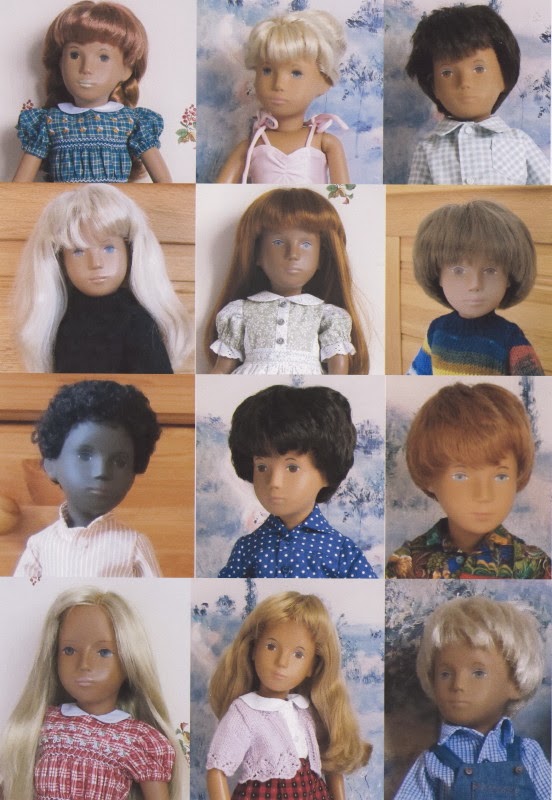 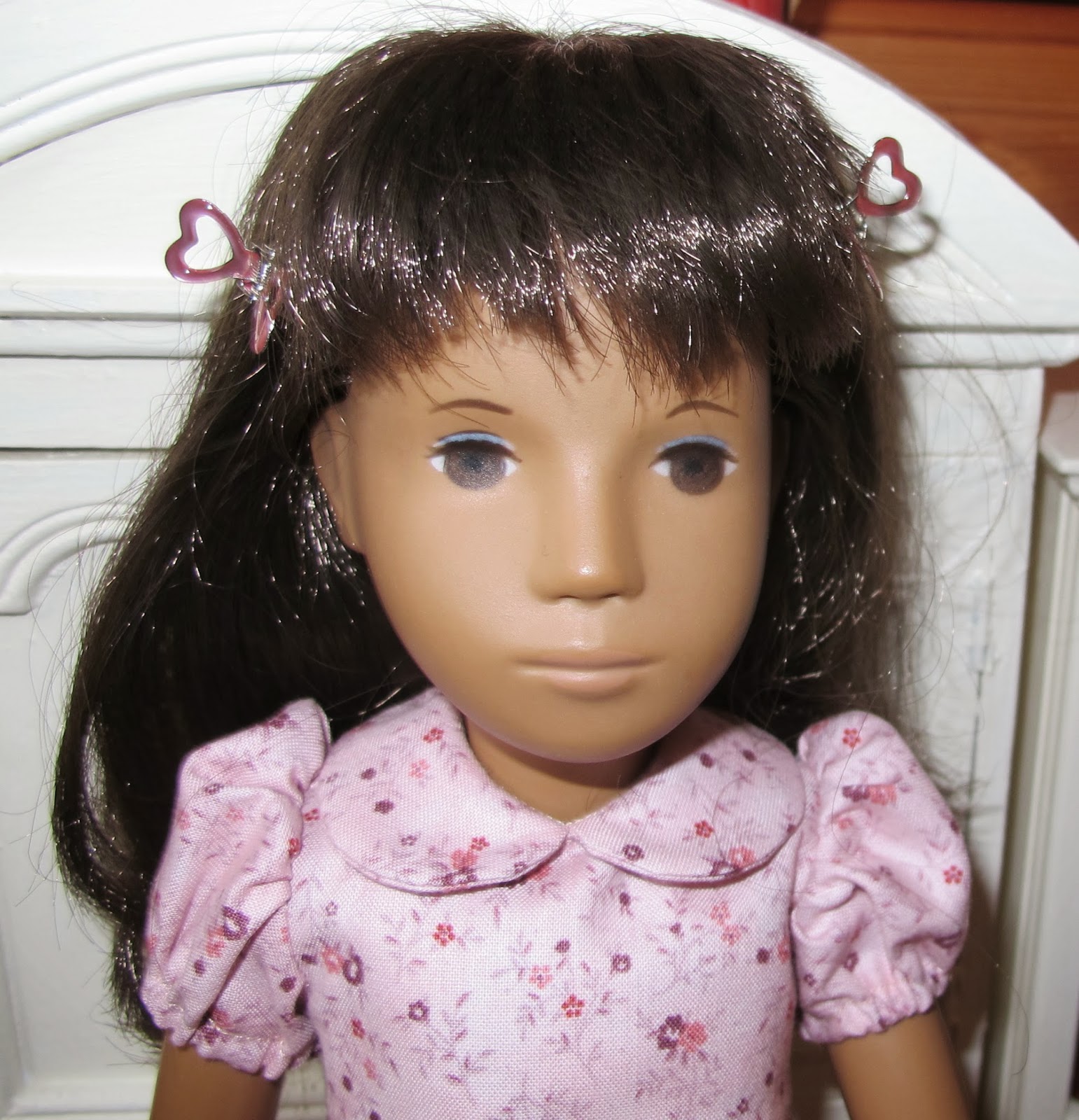 Thanks, Sharon! By the time you said you had a template for the grid, I had done most of the work the hard way!!! All these pics were already in my files one way or another and just had to be cropped. To tell you the truth, I am not as fond of the Goetz Sashas as I am of the Trendons. But they do add a little more facial variety to the mix, I suppose! It was a good idea of yours, that questionnaire! Lots of people commented on Dee's blog when she posted hers and one learned a lot! xxx Karin

wow, you've got 30 in your Sasha/Gregor family, what a lovely collection. like you I prefer the Trendon dolls. Which ones would you sell if you do sell a couple this year?

Although they are rather nice Sashas, I would sell Marina and one of the brown-haired boys. Second group, third row - middle. He is pristine, but just a bit too neat and perfect fro me! Marina is in the first group, third row - first left as you look at the picture. She, too, is lovely and perfect. I don't know why I have not taken to these two! Maybe because they are just too flawless. One of the Trendon blondes - there are two who look very alike - might also be a candidate! I feel really wicked!!! But there really are too many. They don't fit on the allotted shelf any more! xxxKarin

What a lovely group of Sashas , Gregors and Babies you have Karin! Not nearly as many as you led me to believe unless you will be putting on another instalment ??lol
I am impressed that you have fess up , a lot will not ! liking to keep us all in the dark to their Sasha habit!! A little like sneaking out to eat that chocolate while on a diet! or that crafty Fag!!! lol
Love that you did the mosaic! I did not even try and just threw on a few photo's at random.
Nice to have you back posting Karin :)
Hugs Dee

It's always a bit of an eye opener when you see your facts in black and white. I know only too well that I have a lot as they are spread out all over the house but actually counting them one by one is another matter.
Do I count them in groups of Sashas, Gregors, toddlers and babies (doesn't seem quite so many this way for some unknown reason providing that you don't mentally add them together as you go) or ALL together added in one big total sum.
FAR too many me thinks but which ones to move on that is the question?

If it's money that is needed that I always feel that one expensive one to sell is better than a few lesser priced ones. If it's numbers that need reducing then best to try to get several lesser priced dolls adopted.

The next question is.... BUT which one/s are to stay and which to go? Life gets a whole lot harder here so then I start to give up and forget the whole idea.
Back to square one again..... until the next time!

Ha ha, Kendal! That made me smile! The way you describe this dilemma is precisely why I can't make up my mind about selling any of them. I think with your rather sizable family grouping them seems the best way!!! It would be lovely for us to see ALL your Sashas arranged in a grid! It would be like a resource and would help us lesser mortals too decide which ones we really fancy and want to save up for! But you may have more important things to do, I guess! Anyway, your blog is lovely again. I was just about to comment when Lucy (another Spaniel) arrived to stay with us for a few days. Will log on again later! xxx Karin

I soooo know what you mean when you say that you might not have bonded because the dolls are 'so perfect'! I got an almost mint late 70s brunette in Pink Dress (Gabrielle) and she just didn't hit the spot, until firstly I got Shelly to repaint her eyes, then I cut her very full hair into a bob....now I really like her. However, I'm now actually thinking of rerooting her with better hair. She has non falling hair but it is very artificially shiny and a bit unnatural compared to my other Sashas....watch this space!!!

Yes, that's how it can happen. It is very strange. I tried to explain this to my husband who was completely perplexed! To him they look all alike and he just couldn't get his head around this!!! Real Sasha aficionados do not think much of the later Sashas! But I shall hang on to a couple of really beautiful blondes (Rebecca and Imogen - makes me realize I should have added the names to the thumbnails, ha ha). I should like their eyes to be slightly over-painted - just a hint - to take that glare out of them. I am sure Shelly did a nice job on yours! Send a picture, if you can! I shall watch your space with interest!!! xxx Karin