We are going to celebrate VE – Day in our Close tomorrow. We are going to have tea at 4pm in the middle of our Close, socially distancing as is required, and to this end, we have decorated our houses with bunting. It’s a small Close, only 4 houses, but we are a diverse lot and my friend Christine (Isle of Man) thought we should use flags from all the countries that mean something to us, i.e, where we were born, or have lived etc. The bunting that I have inexpertly strung around our house portray the Austrian flag, where I was born, the Pakistani flag, where my husband comes from, and the EU flag, which means a lot to me, because I thought that the best way to honour the sacrifices made by so many people in both wars would best be served, if we all got together and created a safe Europe. I still haven’t given up on that, despite Brexit. I am an optimist.

All that got me thinking about the actual VE Day. Where I was on or around that day. Who I was with and is there any connection at all between me and the Brits who occupied our area for a while. Well there is:

In May 1945 – the year and month of VE day - I was going to celebrate my 4th Birthday. I remember that May very well. I was living with my aunt in Leoben, in the Steirermark, the heart of Austria. My uncle was still at war and had not yet returned. My aunt used to breed rabbits for food in the back bedroom. I didn’t know the fate of the rabbits, she kept all that from me, but to feed them  we had to go to the Glacis, which is a sizable park right along the row of houses in my most favourite town, Leoben. The park, during wartime was left virtually untended. There were a number of air raid shelters dug into park, so that the people who lived there could be safe when the bombs were coming over. We didn’t have to use the shelters. We lived in a house with a very deep cellar. All the residents in our house used to go all the way down into the cellar for shelter. We used to pass many barrels of cabbage lined up on the side of the stairs on the way down. That’s where the Sauerkraut was fermenting. The walls were sheer rock which smelled earthy and damp and the air was both cool and musty. The steps were uneven and very steep and at the bottom, there was a coal cellar allocated to each resident for their personal use.  Naturally, there were rats down in the cellars and goodness knows what else. There was some light coming from the ceiling shaft, which also allowed some air into the cellar. I didn’t like being down there but what frightened me more than the rats was the talk amongst the residents as to what would happen, if a bomb did strike our building and destroyed it. The general consensus was that we would all be buried alive and that in the end, the rats would eat us. The stuff of nightmares. But back to the rabbits. The grassy areas in the Glacis were full of Dandelions and we used to dig those out for their food. They loved them.

On a particular day in that particular month we went to the park as usual to get the Dandelions, and we found the whole area full of Army lorries and soldiers camping near them. They were part of the British Army, and I now think they were massing there before moving on out of our sector. I could see my aunt was shocked, and did not quite know how to proceed, but she could see no alternative, but to go ahead and get the necessary greens for the rabbits. I had strict instructions not to leave her side, and on no account to go near the soldiers, but my curiosity got the better of me, and when a young man in a vest and khaki pants, sitting near some kind of stove, beckoned to me, I went closer. He seemed very friendly and talked to me in a strange language, smiling at me. Then he put his hand into some kind of knapsack and took out a round, flat cardboard box, which he offered to me. After a bit I went closer and took the box and then ran straight to my aunt. Of course I was told off for my reckless behavior, but on examining the box, it turned out to be chocolate. Army rations, as I later learned. 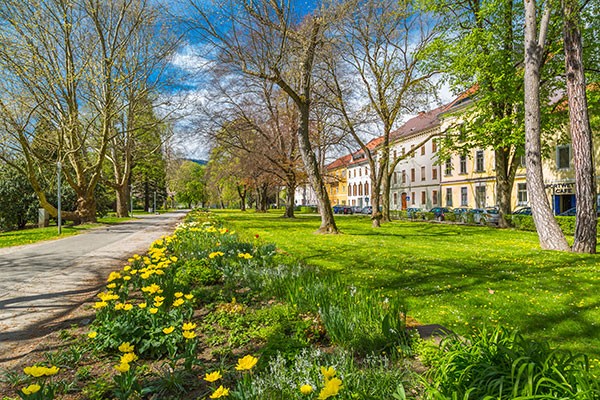 This is the Glacis now, restored and improved. The house we lived in can be seen in the foreground, on the right, the one nearest the two Birch trees.

We went into the park every morning to get the Dandelions for the rabbits, and every day I was handed a box or two of these chocolates by the soldiers. They seemed nice and were always very friendly and they did their best to teach me a few words of English. My aunt lost her suspicions of them. I suppose she realized what they were; a bunch of very young boys a long way away from home. One morning, before we went to get the greens, she baked a huge amount of simple oat kisses and handed them to the Brits. The next day they had gone. That was my very first encounter with the British, but not the only one. Before they left completely, a few years later, I had another encounter with one of their Army Lorries. But that’s a story for another day.


Since those days in Leoben, I have always been very fond of the British people and I loved everything to do with Britain. It is no coincidence that I eventually ended up living here.

I love this post as it reminds me so much of my mother's and her sisters comments of life then and the kind Tommys! Love you dearly Karin. Thank you for this post xx