Having quite a few children come to our house to play with my Sashas, I am always interested to find out what they choose from the clothes boxes to put on them. It is always unexpected and often very refreshing! What we think is the height of Sasha chic, very rarely appeals to them. In fact, I have noticed a trend: little girls prefer long dresses on the Sashas.

Recently my friend Caroline came with her two gorgeous girls, Katie and Emily and after a polite conversation, a drink and a biscuit they made their way to the Sasha room. They always ask which Sashas they are allowed to play with and then I leave them to it.

Here are some pictures of their visit. 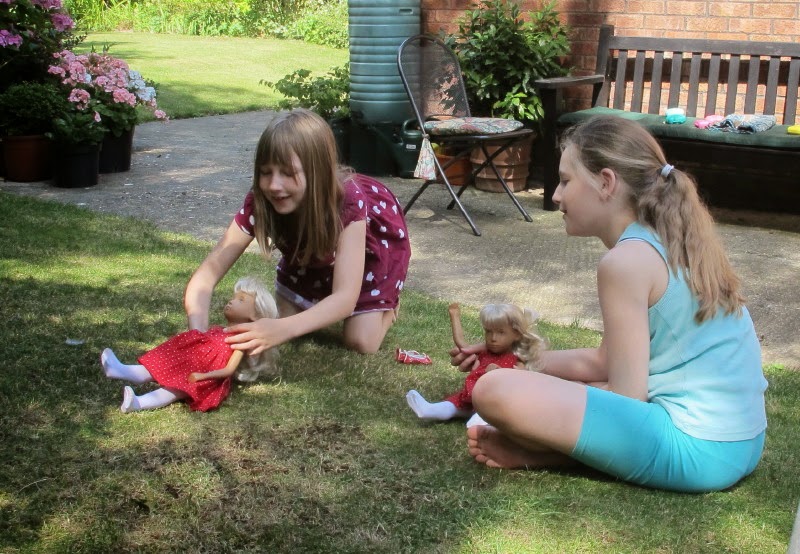 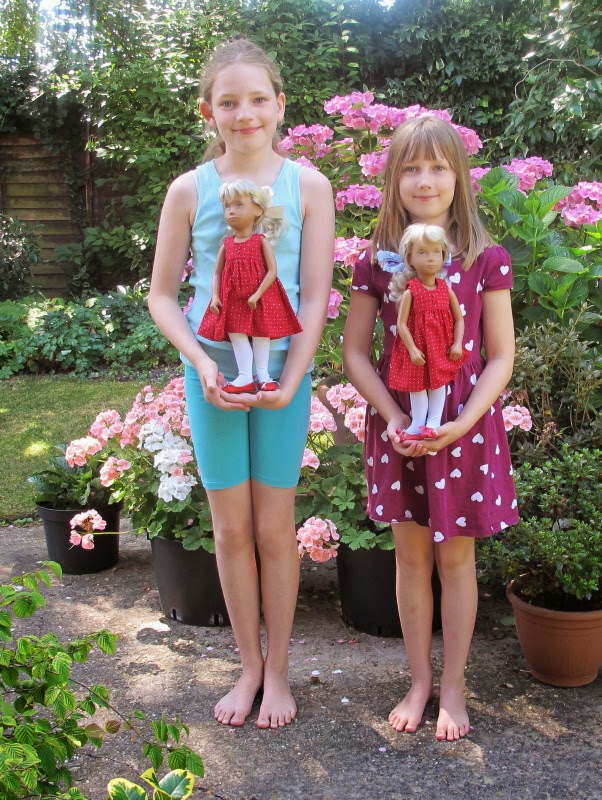 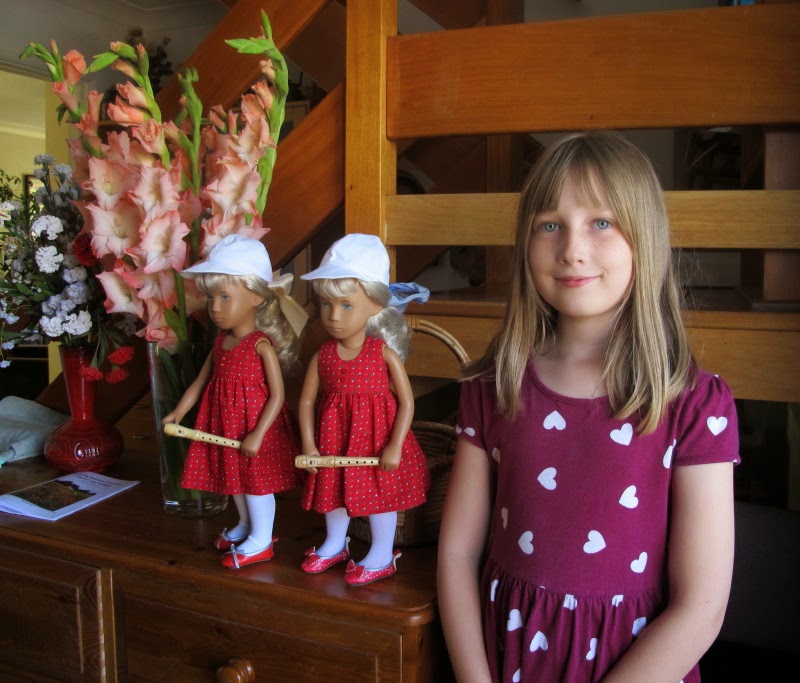 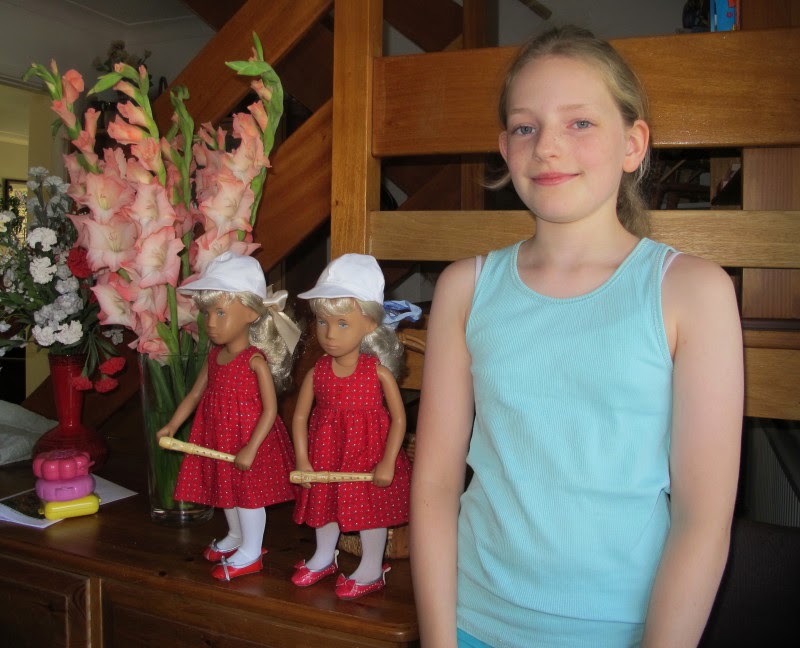 They chose Rebecca and Imogen, two later Trendons, to play with and they dressed them as twins. They were able to do this, because I bought the same dress twice - accidentally!!!

Later in the month my grandchildren came to stay. Iona shares the Sasha room (or is it the other way round?) and she is in her element! She really does enjoy playing with them and she makes good use of all the Sasha paraphernalia I have accumulated.

The pictures speak for themselves, but I overheard Iona say to one of the Sashas who was wearing an exquisite Ruthsdolls outfit: 'Come on, darling, let's get you out of this boring dress'. 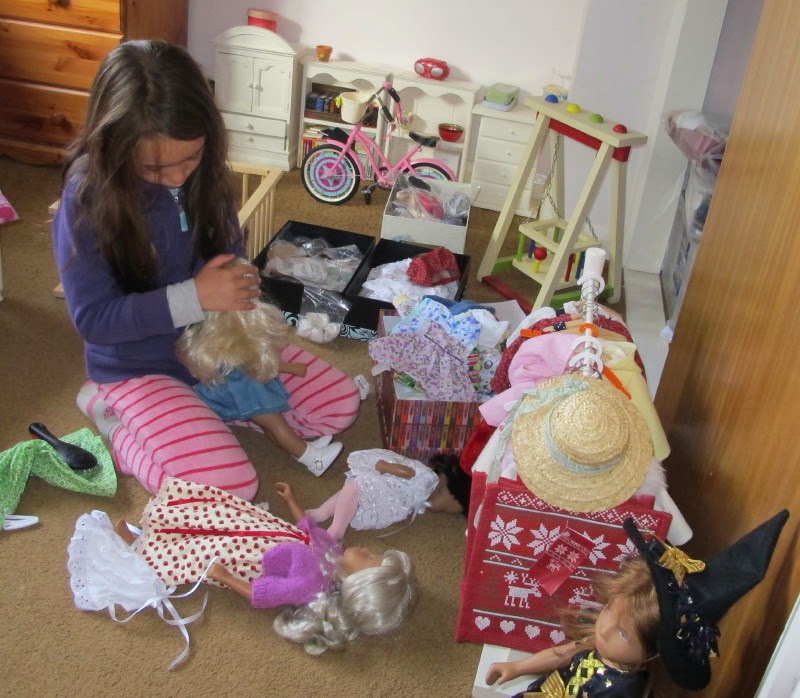 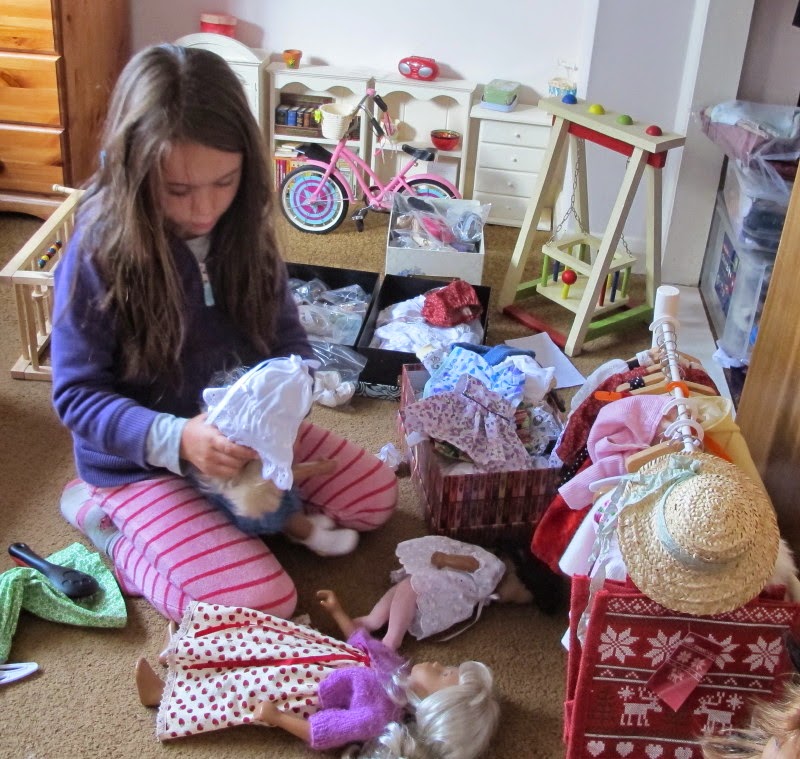 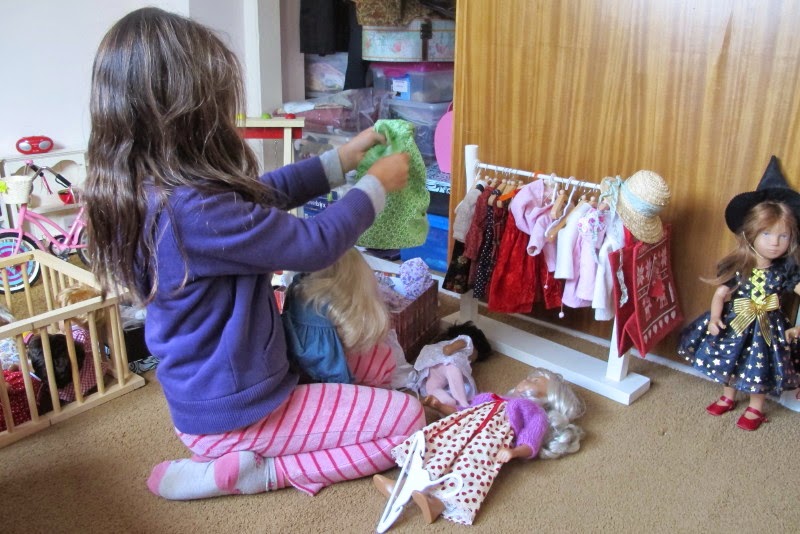 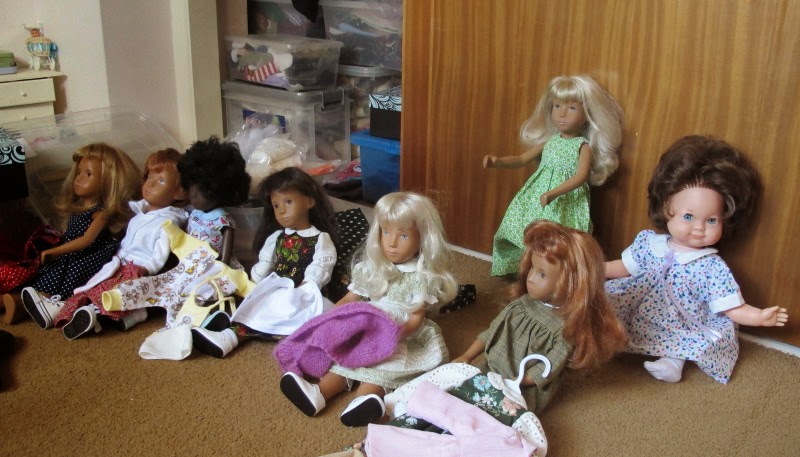 Iona arranged a Fancy Dress competition which her Mum had to judge. We both had to enter a Sasha and a baby and if Iona won, she was allowed to choose an outfit. If I won, Iona would draw me a picture. I lost (but I have a strong suspicion that the result was rigged)! 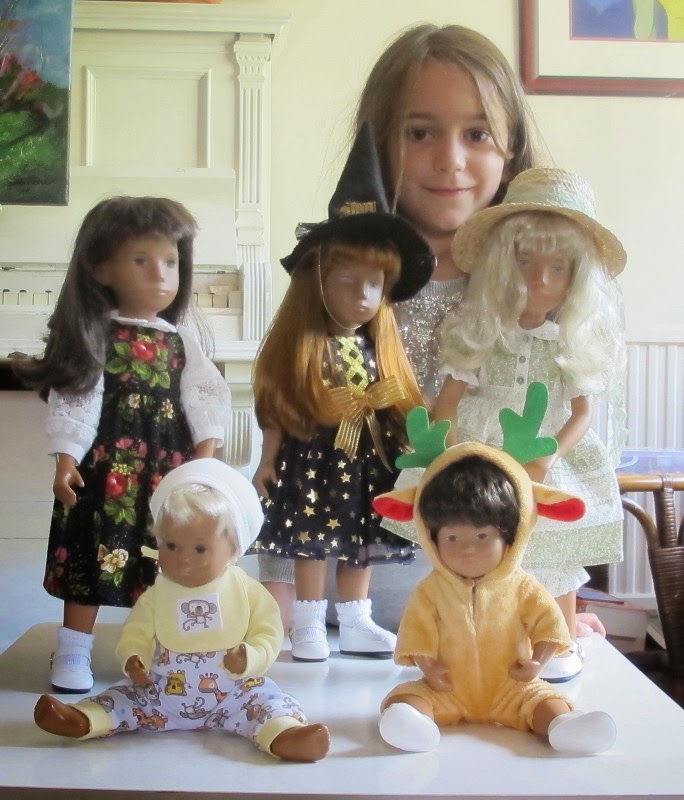 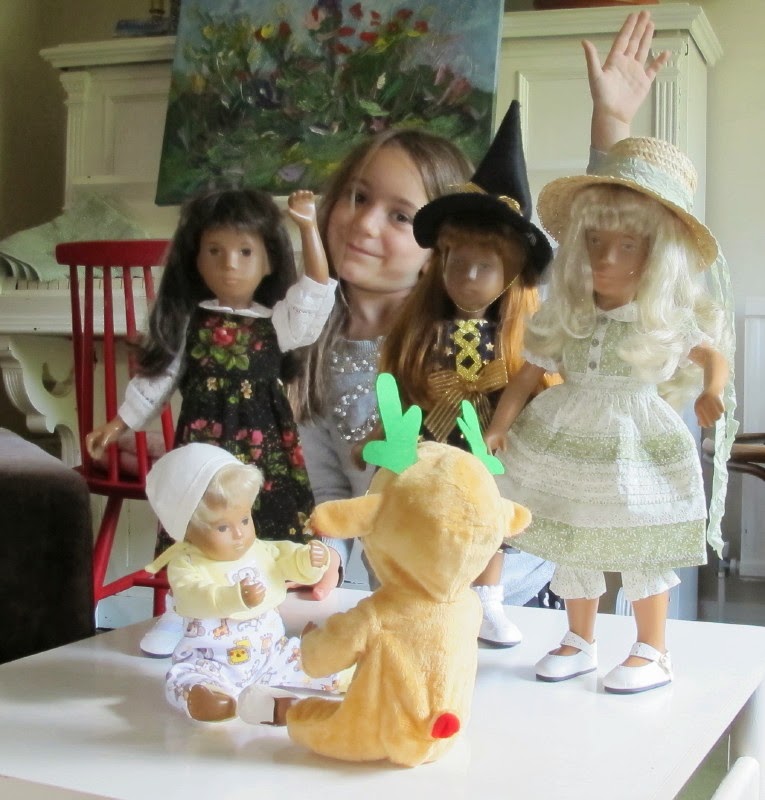 This is Iona (the Sasha) in Iona's (the girl's) favourite dress. This dress was made by my wonderful friend Susan (Grandma of Katie and Emily) for Yasmin's Sasha way back in 1975. I think it is a Laura Ashley print). The bonnet actually belongs to a baby, but Iona really loves it and has taken it home with her for her own Sasha to wear. 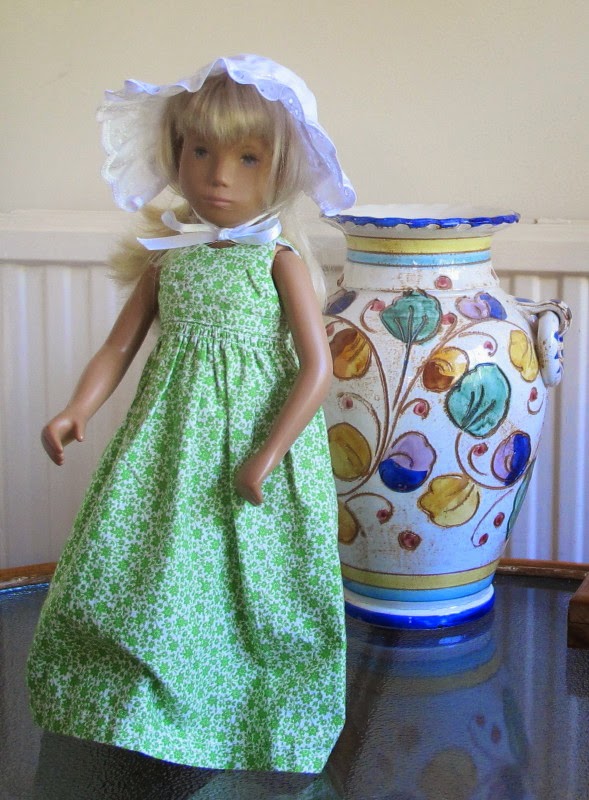 What fun it must be to have young friends come to visit and play with your Sashas.....I'm waiting for the day when I have a grandchild to do the same thing ! ;)
It must be great fun to visit someone who has such a lot of nice things to play with. I remember when I used to visit my nana, she had a great button box that I always emptied out on the table so that I could go through her buttons....funnily enough I still have some of those buttons now! And she had a great sewing box which I also inherited, as well as a jewellery box which was always great to root through...she even had a wig on a polysterene head that I used to style....until I decide to take the scissors to it one day...Oooops! But never did she have any dolls for me to dress, so your little visitors are very fortunate!!!!
Big hugs Sharon xxx

I think it is even more special when children play with Sasha as that was what Sasha Morgenthaler originally intended and how wonderful that you have children to share this love with. Also lovely to observe how they play and think and dress the dolls. I have to say I prefer the longer dresses as well....some I think just look too short on them for their age, although I know that was the fashion in the 70s.... it was a bit of a mixture of both long dresses and short if looking at my childhood photos are anything to go by.

What fun they had.

Your young visitors are very lucky - a built in playroom/doll haven for them when they come to see you. It is very interesting that they generally seem to prefer the longer dresses for the Sasha dolls and the earlier dolls.

What a lovely time young visitors to your house have! being allowed to play in your Sasha room with your dolls and their clothes. It wonderful to see children interacting with these dolls and enjoying them.

I am always delighted when they spend hours with the Sashas! It really confirms Sasha Morgenthaler's notions of what a doll should be and what enjoyment such a doll provides.