I suppose nostalgia plays a part when you grow older. I find myself nostalgic for things Austrian, from time to time, and my Sashas seem to be the victim of this longing as the following pictures will show. Here is a photograph of Yasmin, aged 4, in a Dirndl dress my mother made for her. The next photo shows my Sasha, also called Yasmin, in a Dirndl made by Ruthsdolls. 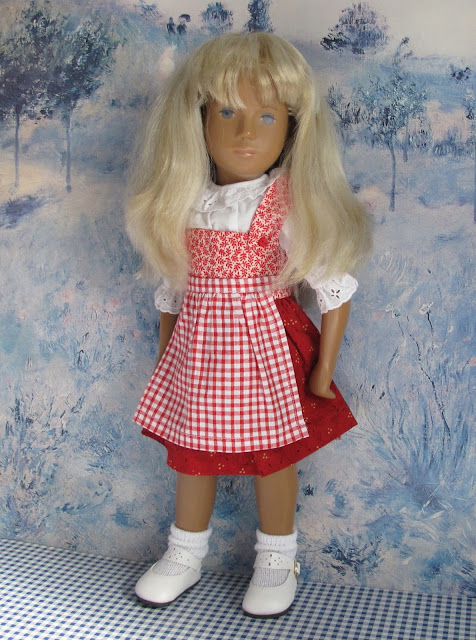 Ruth calls this ‘the Bavarian Costume’. I was delighted to find a garment for my Sasha which reminded me of my place of birth.

I soon added a few more Dirndls for my Sashas. Here is an example of one of Stela Aranghelova. 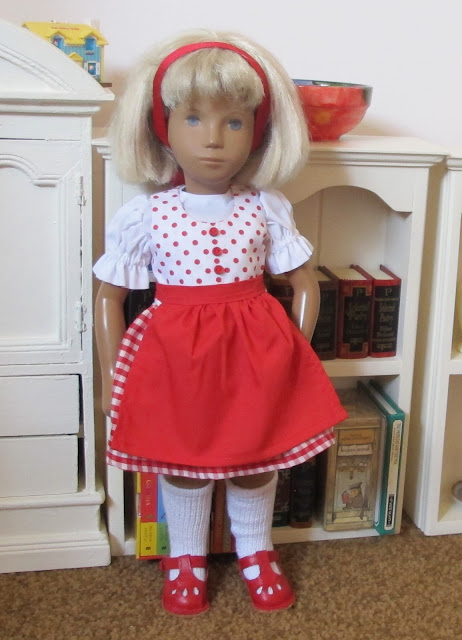 Soon after, Ruth made me another, really gorgeous one, in blue. 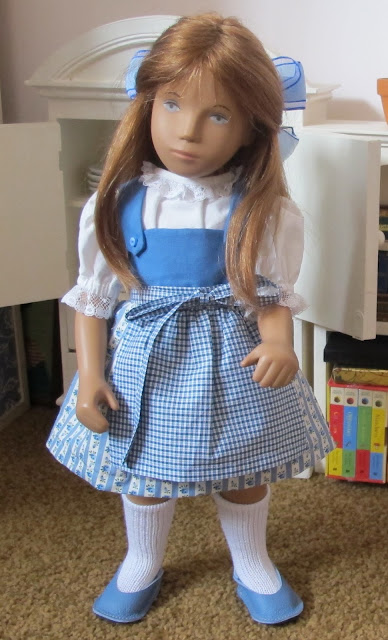 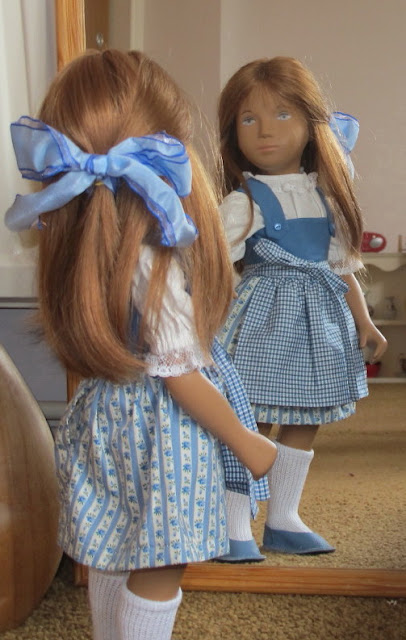 Then, Diane Duke, the intrepid traveller, told me that she found a Käthe Kruse Dirndl in a shop in Tirol, which she brought back for me. The following year she brought me another one. Both really nicely made and fitting perfectly. 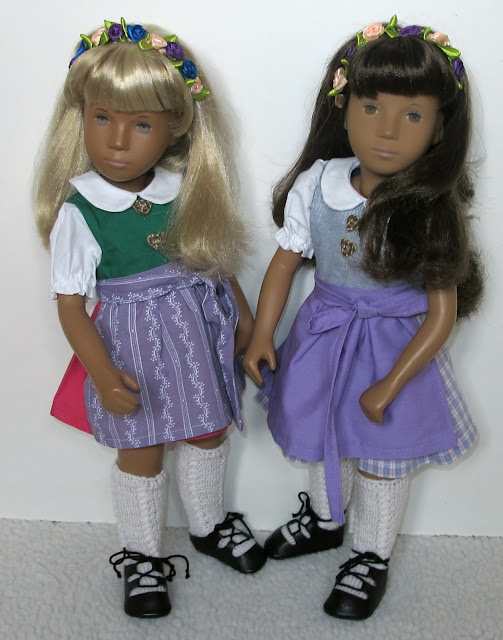 Next, Diane got very interested in traditional Austrian knitwear and how it might be adapted for Sashas.  I got very excited over the idea of ‘ The Jopperl’. A cardigan/jacket which we all wear in Austria – girls and boys! It is very practical, very warm and partially weatherproof.  Diane being Diane went ahead and started designing and adapting the idea. She succeeded brilliantly! 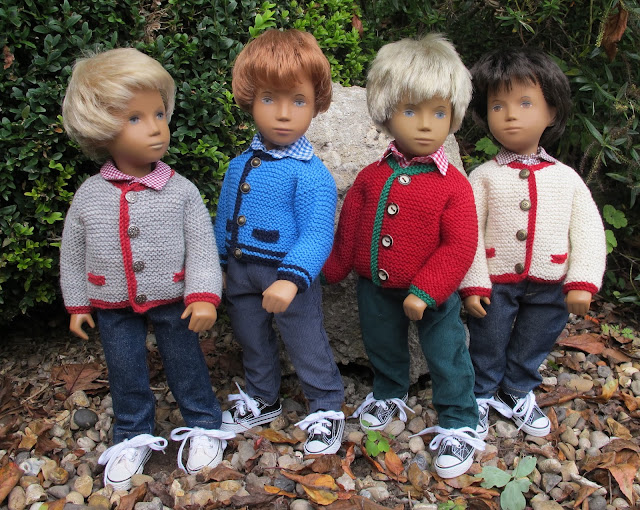 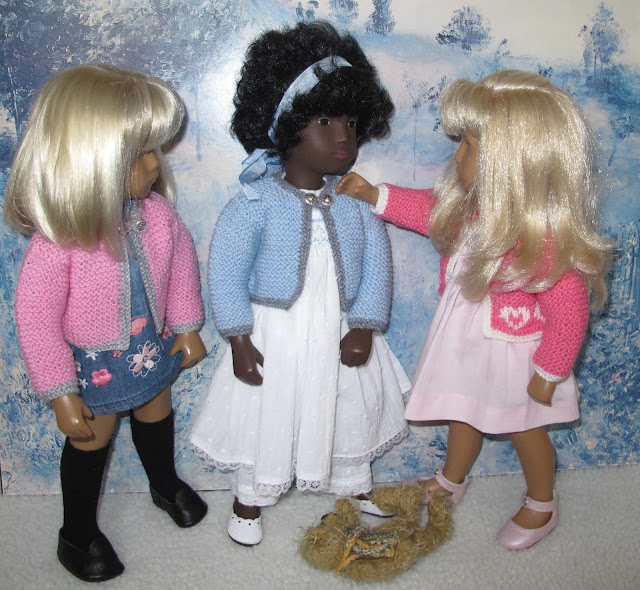 I thought how much fun it would be to have my kids dance around a Maypole in traditional Austrian costumes. This seemed a bit elaborate, but an opportunity presented itself at the 2017 Sasha Celebration Weekend. The theme was ‘National Costumes’ and I thought a Maypole exhibit might fit in with that theme. Both Tricia Jackson and Janet Myhill Dabbs thought it was a nice idea. So I asked a friend to help me construct a Maypole. Of course, I needed more girls in Dirndl dresses and that’s where Marilyn Hotchkiss came to the rescue. She made me some gorgeous Dirndls and also some Knickerbockers for the boys. Rosie Laird knitted the perfect socks for them all and Lisa Hartley provided the footwear.  We were all set for the Sasha Celebration Weekend. We dressed up the kids and had a try-out in the garden!!! 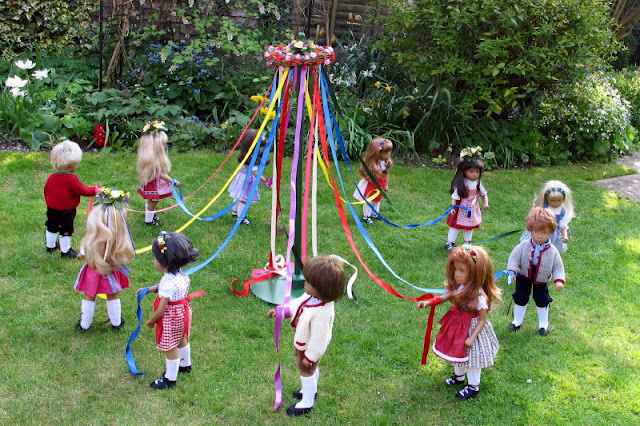 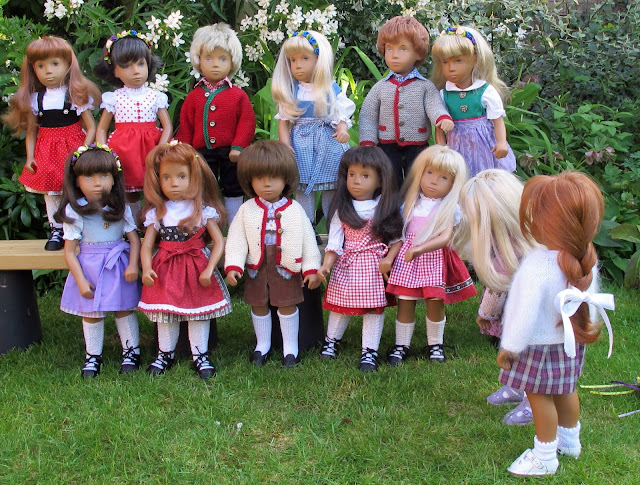 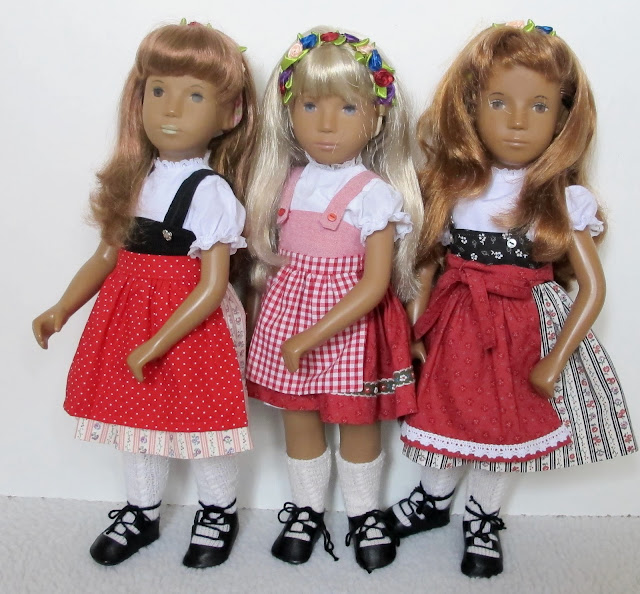 When I arrived at the SCW we realized just how big the Maypole was and how much space it would need, so some last minute arrangements had to be made to accommodate it. It caused Janet a bit of a headache, but it was all sorted out and in the end it worked really well. Some other participants brought Sasha kids in traditional costumes along (Madeleine Foong’s gorgeous Sashas) and they joined in the Maypole dancing!!! There was even a cow, with a bucket at both ends (!), a goat, a Toddler and a cowbell – all supplied by Diane Duke -  to join the fun! 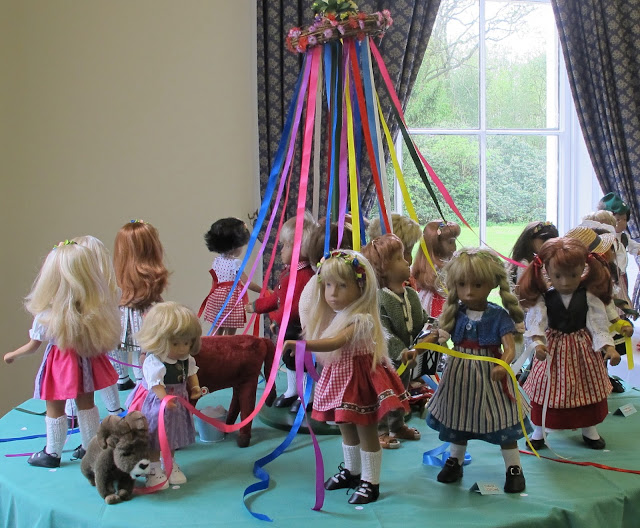 A final word: The creative talent in the Sasha community is astounding. That’s how it was possible for me (who has no talents, ha ha) to put something like this together. Thank you all. It’s a joy to know you.

Postscript: In Germany and Austria the Maypole is a tradition going back to the 16th century. The tree is erected on 1 May on the village green or in the town square. There is usually a festival to go along with this, with dancing round the Maypole – to dance in the month of May.

What a lovely interesting post Karin. Your Daughter and her daughter look so alike, I hope I'm allowed to say.. say children some time don't want to look like their parents.
I love all of your Austrian clothing and the dolls wearing them.

Your Maypole was a masterpiece and looks just wonderful, especially when you took the photos of it outside on the grass.
You lie when you say you have no talent, everyone is talented in one way or another, yours is in the wonderful photos you put together , with those little things happening in the background that tell another story. So I have to say you are very talented and just point you to that maypole and mention the cricket match to prove my point. Dee xx

Gorgeous girls and boys in their outfits. The Maypole display was wonderful <3